So here’s the deal with camping on Kauai. You have three options:

1) Private campground but only one is currently open-Kumu campground.

2) State Parks, two to chose from but both require permits and we should have applied before we came as they were full and

3) State parks with more campgrounds and more availability, but a couple are closed due to mud slides, and some parks do not allow Van camping- side note: I don’t think there are any RVs on Kauai. However, most state parks close one day and one night per week ostensively for maintenance but more likely to keep you moving and discourage parks becoming sites for the homeless which we saw as a major issue Oahu has.

so we had to figure out our itinerary. We had booked Kumu before we left to align with the Pacific Seabird Conference as it was the closest campground (30 minutes away) to the conference. Our first priority was to have a place to stay for Tuesday night, it being the night two County Parks closed so we booked Anahola for Tuesday. Which meant we should do the South shore first then the north shore, then the northeast to be close to the conference.

After being south at Salt Ponds, we moved north to Anini Beach for two nights and spent a day exploring that area. Anini and Salt Ponds County Parks don’t allow van camping but they ignore it so we took our chances

At Anini the forecast was for rain late at night so we all stayed in the van. In the morning we saw a tent flattened by the rain, with all their gear soaking wet on the chairs and picnic table. I wondered where they were but not for long. No fools them. They had spent the night in their car perhaps already having experienced a previous rain flattening event or, maybe they were forced to abandon it in the wee hours. 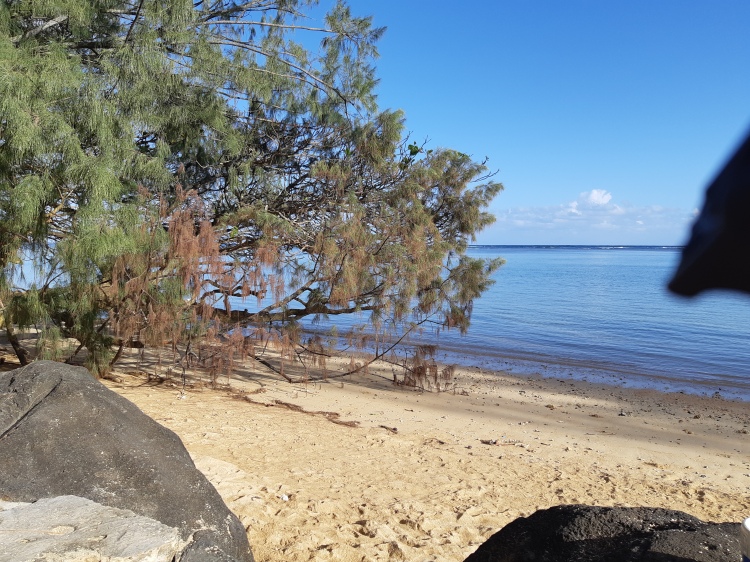 Coming back that evening we parked in the public car park which by now had emptied of day trippers. We chose a spot right at the oceanfront between two cars. On looking closer at one car we realized it hadn’t moved in weeks. It also was piled with stuff inside and out front. Ian wisely moved our van a few spots away from what we suspected was a homeless hangout.

There was a lot of activity in the middle of the night and I, being up top in the roof tent had a birds eye view. On being awoken, I just had to roll onto one side or another and open a corresponding eye to peer out a side tent window too see goings on. A car pulled up a few spots away and parked. Meanwhile someone had taken over a picnic shelter and the light shone highlighting a couple of guys. Silhouetted in front of the shelter was someone dancing around. I could see the beam from a headlamp bouncing, turning, looking low, looking up. It took me a while to figure out it was someone raking leaves in the middle of the night! I went back to sleep. A light closer by woke me next. The homeless man was out and puttering around his possessions, stacking, moving tying things up. As long as he was focused on his possessions and not ours I figured I could leave him too it and went back to sleep…but not for long. A car with blue lights flashing was slowly driving along the main road. The homeless man was walking out of the parking lot and the police car stopped and they chatted, then the car went off and he headed to the washrooms close by. Back to sleep for a few minutes to be awoken again. Another car had arrived and parked between the homeless car and us. I don’t know how long it had been there so didn’t know how many people came in it but I saw a light shining between the two cars highlighting only one person. More flashlight activity around and in the homeless car and now the new car. This went on for awhile and then someone started up the car. They seemed to just sit there for a few minutes. Warming up? Then, with no headlights on, they backed out of the lot and backed down the road and backed into the lane next to the washroom building. Someone came out and more activity, then back into the car and they drive off not turning the headlights on until they were back on the main road.

Daylight brought hints. The homeless car junk had mostly been cleaned up. The garbage at the washroom contained two new huge black bags full of garbage. The picnic shelter was clean, the park had been swept. All my imaginings had merely been the Park night shift staff.

Looking at our schedule we realized we had double booked Tuesday night. We had reservations in the private campground at Kumu and at the County Park at Anahola which are practically next door to each other. The wind was howelling so we decided to go to Kumu which had bamboo walls in front of the tent sites. While attempting to put up the tent and young couple walking the beach asked us if we knew where the camp office was. We realized we didn’t have a clue. It being Tuesday night they booked too late and found Anahola was full and they were desperate. No problem we said we have a reservation at Anahola you can have. They were delighted! ‘What are the odds?’ He shook his head as they set off to set up their camp.