Two years ago a group of us went on a Trudy adventure to Oahu where Trudy was attending the biannual Pacific Seabird Conference. The conference hotel was $400 a night but Trudy found a campsite nearby that only charged $9/person/night. We would drop her off at the resort in the morning, have coffee there, use the resort’s internet, make use of their beach, showers and washrooms, and pick Trudy up at the end of the day along with conference left-over boxed lunches. Back at the camp we would hunt for wild chicken eggs in the surrounding bushes for our breakfast. I am proud to say we did Hawaii for less than $50/day.

Two years later we are going upscale. We rented a VWCamper van called Janie. She’s beautiful! It still costs $9/person/night for a campsite as well as Janie but with hotels $300 and up, she is a real deal. And fun. 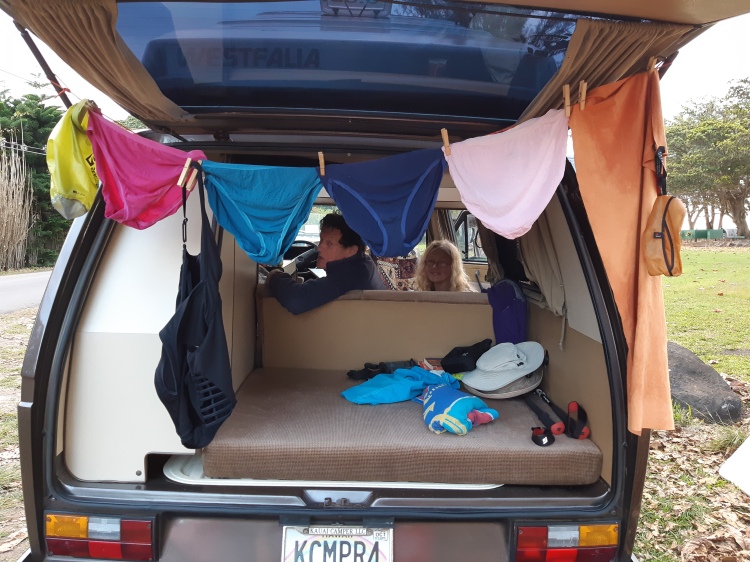 We took her south to Salt Pond County Park and set her up and went for a swim. Salt Pond is named for a traditional salt field next door, a low lying field of red iron oxide mud. A local told us that every ten years a group of families came and did whatever was necessary to the field (flood it with seawater?) and left it to do it’s thing (evaporate?).

There are birds everywhere, mostly on the ground, mostly chickens and beautiful cocky red roosters, mryna birds, zebra doves and a couple red crested Cardinals. Coming back I collected a few feathers because that’s what I do. I remember putting the feathers somewhere safe so the wind wouldn’t blow them away. Then I lost the van keys somewhere in the van. Thirty minutes of hunting produced nothing. I knew if I could remember where I put the feathers I could find the keys. I said to worry, they will turn up in a couple of days. Today was day 1, we had all the time in the world to relax and let the keys (and feathers) reveal themselves which they did within hours one I concentrated on the feathers and found the keys in the day pack I had already searched three times.