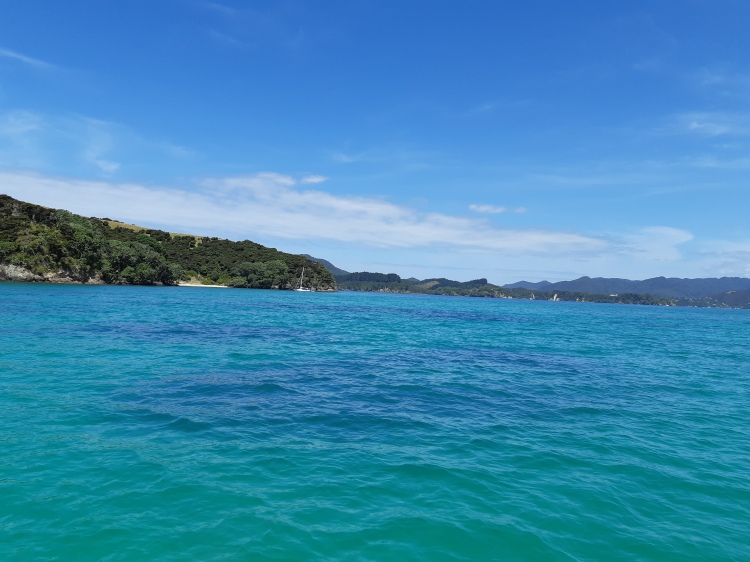 We head out in a boat to see the Bay and hopefully see dolphins. Rules around dolphin watching are strict: limit your time, only watch a pod once, and no swimming with pods who have babies. Yes, you can swim with wild dolphins but luckily the pods we see have babies.

Floppy, our on-board guide, is on the hunt for a mother grieving for her stillborn dolphin baby. There has been a report of the grieving mother holding the baby at the surface much like the recent death of a baby orca back home where that mother held the baby up for something like 17 days. Floppy wants to find her just long enough to be able to identify her.

We find a pod, Floppy tells us who is who and we watch them fish and play before our time us up and we head in to a beach to swim. Graeme, the skipper, pulls in close to a beach and people jump off the back of the boat.

On the way back in someone radios in a sighting of the grieving mother and the dead baby. We head to the spot and find her. Floppy identifies her and we back away to leave her to mourn.

We had read about sand boarding down giant sand dunes at 90 Mile Beach. Having snowboarding champion and coach of the Vancouver Island First Nations snowboarding team Steve Reclama with us, it was a natural activity to try.

We drove the vans down onto the beach and parked them but that was only because there was no where else to park them and it was at low tide. We hiked 40 minutes further down the beach to find the dunes. 90 Mile Beach isn’t really 90 miles. The story is that it took three days to ride a horse to the end. Estimating 30 miles a day, they called it 90 miles. It’s actually 88 miles, they hadn’t calculated it would be slower because of the sand. You can drive on 90 mile beach, and believe it or not, it is officially a highway although they recommend 4wheel drives only and to do it at low tide and leave yourself an hour each side.

What we hadn’t counted on was the steepness of the dunes and the hot sand–a foot deep of heat. But we had a few brave souls who climbed and climbed and and climbed despite the hot sun and hot sand had slow rides down to the beach ploughing hot sand up their shorts as they went. The youth enjoyed it but probably wouldn’t choose to do it again.