I made it to YVR still smelling of eau d’otter and ran into David and Victoria, friends who were on their way to London but had an earlier plane. They didn’t seem to notice anything unusual so that was a good sign. Victoria loves to walk and both she and David seem very intrigued by the Portuguese Coastal route Camino. A seed has been planted.

While waiting for boarding, I read a screaming headline ‘Iceland Katla volcano ready to blow and cause global chaos’. I was about to board Icelandair to Reykjavik and there to change planes and onward to London. Was this an omen?

It got more omenous. Icelandair names all their planes. I noticed the one I was entering was named Katla! 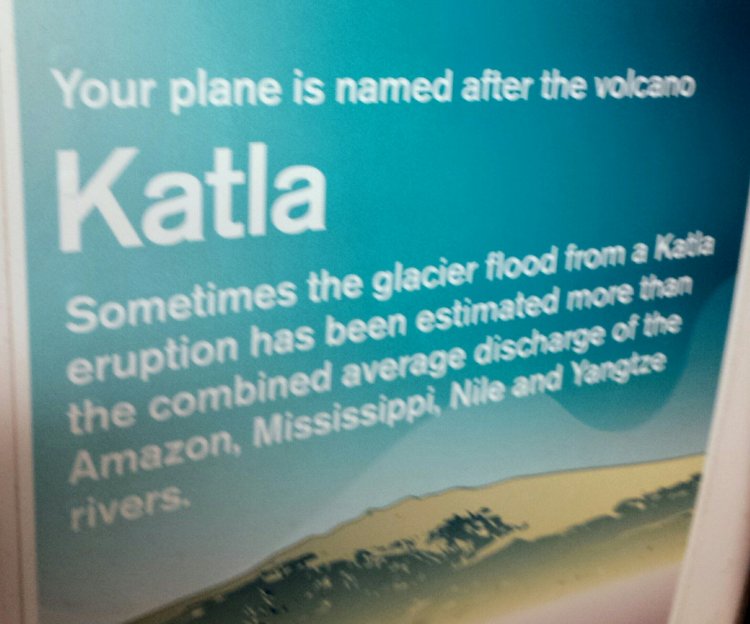 Iceland is a major airline hub but the airport itself is small. Our plane landed and taxied over to the edge of a field and we disembarked into a gale. I was soaked just getting off the plane. Apparently the Icelandic language has over 100 words for wind. I am not sure which word describes a horizontal wind carrying pellets of water. Last time we were in Iceland we saw a wind gusting up a valley so strong that the waterfall coming off a steep cliff flew upwards upside down in the wind a hundred feet before flying again, this time coming off an invisible mountain. I bet they have a word for that.

I finally reached Gatwick airport and dug through my pack to find a heavy stack of £1 coins. I was feeling a little smug about having kept these from a trip years ago and I could now put them to good use and get them out of the house. I needed £3 to get on the bus to the hotel. My stack of £1 coins and my new Scotiabank Credit-card-which-does-not-charge-foreign-transaction-fees were all I needed for the 24hr I would be in the UK.

This plan was in shreds within minutes when the bus driver pointed out that the coins were withdrawn from use years ago.

I retraced my steps. No problem I thought I will use my new Scotiabank Credit-card-which-does-not-charge-foreign-transaction-fees. I admit to feeling a little eager to use it especially when I saw an ATM machine advertising no-charge usage. Thinking of all the money i was saving I put my card in the machine and it ate it! A message appeared ‘suspected tampering’ and it refused to give it back. The very first day of my trip and my new Scotiabank Credit-card-which-does-not-charge-foreign-transaction-fees gone. My sleep deprived brain was stunned.

I do have a second emergency credit card but there was no way I was going to try it. I was advised by the currency exchange next to the ATM to phone my bank right away. I had some Euros with me which I exchanged at a huge markup. But they didn’t have small change. This all sounds simple but it wasn’t. It involved: going to 2 different exchanges, finding a store to purchase something cheap that would give me at least £3 of change to get on the bus, walking in and out of the building to find a cell phone signal, and Googling for the Scotiabank phone number which by the way did not work nor did the 4 other numbers they listed on their Web site, nor their call-us-collect numbers, nor did going through an International telephone operator who tried the same numbers. Ok, ok, ok, Cathy did tell me to write down in advance all the credit card phone numbers from the back of my cards on a piece of paper. Somehow I never got around to doing that. One of the International telephone operators suggested I try calling from a landline. I vaguely remembered reading something about how landlines and cells operated differently here and you dial different prefixes. My hotel, I later discovered, does not have landlines.

And then my stomach started churning. Was it the packaged ham and cheese dry non-croissant or the Icelandic Skyr or maybe the mushroom soup back at YVR?

Feeling: hungry but not wanting to eat anything (for a good practical reason).