A day to break all records!

First, I am sleeping in a bed with sheets! A pair of sheets, I.e. One on top of me and a sheet below me! In a real bed, not a bunk bed. And it is a double size mattress. Whoppee! And there is towels for the shower! Real towels made of soft cotton loops! Paradise. The fact that there are three other beds and three other people in this room is immaterial. Heck, I have slept in a room with 30 strangers. Anyway, I know all three. Mats of course, along with Byron and Melisa from Winnipeg.
We ended up here in a Hostel, not an alburgue, because the last two were already full and two others had closed for the season. We ended up going 39k! 39k We are up in Thomas’s league. We started at dawn and got here just as it got dark. That was a record breaker for walking.  Strangely my legs don’t feel 39k worth of being tired.

Most of the day was spent on trails through wooded areas. We stopped twice for a picnic, passed the Berliner and his godchildren and in turn were passed by them. Likewise with Byron and Melita who were picnicking too. 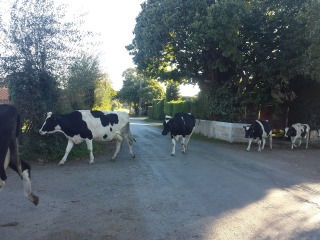 At one point I looked up ahead and saw Mats ‘Future Wife’. I turned to him and saw he was brushing his moustache with his special moustache brush. ‘Mats, there is your Future Wife.’
He didn’t skip a beat, ‘Why do you think I am brushing my moustache?’

We walked with her a little before our natural pace forced us ahead. Later on after picnicking again we headed off the trail a couple of k to an albergue but ran into her coming towards us. No room at the inn. We turned around and ran into Byron and Melita again and they joined us searching for beds. We headed for an albergue down the road a couple of k and entered into a spa-like albergue with a lounge. We were created by three or four pilgrims we had met, but like the last albergue, this one too was full. Mats and the receptionist took care of everything while I shared my Toberlone and nuts with Byron and Melita. We did an inventory of food in case we couldn’t find a place for dinner. We had enough and could survive as long as we had a place to rest. It was getting dark but the kind receptionist had phoned ahead and booked us a room at a hostel/pub another 2k down the road. Mats led the

way and we finally found it. They also served food and as I dug into a tuna salad (endalada mixed con atun) we saw Mats Future Wife wave as she headed out the door having decided to walk on in the dark.

Time on trail: 12hrs.
Weather: a few sprinkles early in the morning, then clearing in the late afternoon.