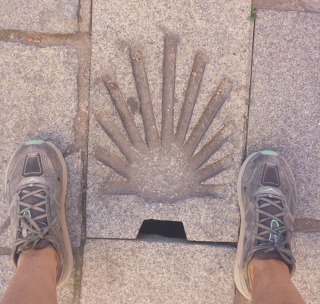 We had chosen the albergue closest to the Camino coming and leaving town, but 7 am found us having to hike an extra .5k into town and back for coffee. But in the grander scheme of things, what is 1k extra? This was the earliest we had ever started out and all because my watch somehow jumped an hour ahead. I woke Mats up and he checked his iPhone as per usual and in his disheveled state sitting on the top bunk he looked down puzzled, ‘Why, Liz?’
I thought that was a silly question, ‘because it is almost 7:30!’
‘But why does my phone say 6:30?’
Oops.
By then it was too late. He was wide awake.

As we entered town in the predawn fog, we met Byron and Melita on their way out of town. They always seem to start an hour before us. We keep leapfrogging each other. 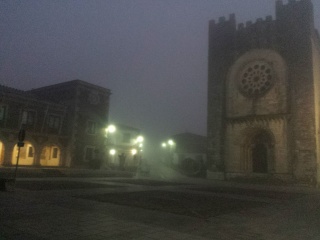 We got to Palas de Rai but it was only 2pm so we stopped for a drink, ‘Aquarius’ for me. This was a drink to replenish your salts, a non-alcoholic drink Rob had introduced me to. Very refreshing and very little sugar. Mats liked his Patcheran. There were only three tables on the sidewalk. We sat at one end, Peter and his partner Linda (the couple that found our Linda’s wallet) sat at the furthest, and two young Spanish men sat in between. When Peter asked Mats what he was drinking, the Spanish men taught us a bit more about Patcheran. They were delighted that a Swede was drinking the local liquor. It is made with Sloe berries, (the photo looked like blueberries) and aniseed. It is a pretty pinkish/red drink. But frankly, to me it tastes a bit like Buckley’s cough syrup although thinner.
Sitting there right alongside El Camino, we saw many pilgrims we had met. Most had planned to stay here in Palas de Rei but we still had energy left and planned another 5k or so. Across the street in a town square we waved to Mats ‘Future Wife’ who was taking a break on a park bench. She walked slow but like Melissa, made up for it in distance. At one point she told us she only sleeps 4-6 hours a night, so why not walk longer.

Refreshed we walked on. 4.5k outside of Palas de Rei we came to Casa Domingo albergue in San Xulián. Should we stop here or go another 2.3k to the next albergue, easily done but it was almost the end of October and we were noticing some albergues were closing for the winter. Mats waited for me to decide. ‘Ok, lets stop here.’ I liked the look of this place, a converted grain mill. Besides, I was getting tired.
Mats smiled knowingly ‘Ja gutt. I have learned not to push a woman.’
A wise man.

They offered laundry service here, so I had my sleeping bag, sarong and a couple of other items put into the dryer even though they were clean and dry but it was a precaution against any lingering bed bugs. Dryer heat kills them, so now whenever there was an option for a dryer, I took it. The dirty clothes we had done in the washer and then the extractor and we hung them on a line where the wind was blowing so hard it was difficult to grab the line to hang them on.

It was a communal dinner but mostly in French with some German. A very pretty French woman with the nicest smile said she had walked with Linda a few days ago and inquired about her (Linda wasn’t far behind, in Palas de Rai). She reminded me of a Walt Disney chipmunk: sweet, big round eyes, big cheeks and a small smiling mouth. Or maybe Sleeping Beauty.
A bushy bearded man from Berlin was there. He had started his walk from near Berlin and had been walking for three months. A woman with him said he was her best friend and her two teenage children’s godfather. They had two weeks off school and were walking with him into Santiago.
After dinner Mats paid for the laundry and we went out to retrieve the laundry in the dark. I went to find my headlamp when the owner came up to me and lambasted me ‘You no pay laundry!’
‘My friend did.’
‘No! You no pay.’
He was very angry and I was very confused. After he left, I sought out Mats at the laundry line. The German woman was there too. She asked if I had been harassed by the owners dog. Mats replied for me ‘no, by the owner.’ At that point the owner came back very apologetic, praying for forgiveness, explaining he had written down the wrong information. Mats told me later he had paid the wife and she had probably made the mistake.
Anyway, despite the confrontation and apology I felt awful. In the morning I gave Mats my money to get me coffee. I didn’t want to face the owner again.

Distance travelled: 29k
Distance to go: 91k
Food: café con leche,  neopolitan, lunch?, Galician soup, squash soup, Galician bread, tortilla, meatballs, salad and ice cream with a bit of almond cake.
Lesson learned: even the innocent are guilty…of something
Feeling: lambasted and guilty for something I didn’t even do.
Aches and pains: none to speak of. Maybe tired leg muscles.