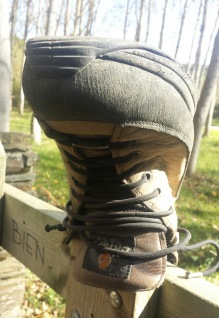 In which Liz and Linda make a run for it, breaking out of an albergue in the middle of the night.

Brace yourselves for this blog post: it’s a doozy. Grab a coffee or a glass of wine (or for you Mum, a G&T….maybe two).
At 7 am, there is a major discussion going on outside our bedroom in the hallway with one of the volunteer  hospitaros (volunteer host of an albergue) and two peregrinos. ‘It will have to be treated with chemicals.’ I interpreted this as meaning the bedroom across the hall had bedbugs. The two peregrinos did not look happy.
TPTP peed again thus time in the bedroom.

It is not even 7:30. This is the earliest we have ever left, 5 minutes before they would have kicked us out.

It’s only when we are having our first coffee that I notice a slight itch and a welt on my wrist. Then I see two more further up my arm. They say bedbug bits are usually 3 or more in a row and found more at your extremities, I.e. Towards your feet and hands. Damn! Bedbugs.
I phoned the albergue and talked with a volunteer from California letting her know that our room, my bunk, also had bedbugs. She was very grateful. There is a protocol to follow and while I didn’t know what it was, I did know you had to inform the albergue and wash everything. Dryer heat apparently is enough to kill the bugs. My cousin got them and put all their things in a green garbage bag and left it in the sun.  That was enough to bake them. I was about to learn more.
We walked out of the city, only getting lost for 3k before GPS-ing our way back onto the Camino.
It was a beautiful walk through rolling hills of vineyards and stone villages. We stopped for coffee and I put my head on the table and slept for 5-10 minutes while Mats chatted with Brian (England) and Brian’s Camino girlfriend of less than a week. She had to head back to the Netherlands for work and he was continuing on. Their goodbye embrace and kiss was quite touching considering the brevity of the relationship.
Thomas was still sending us reports of places to see, what to avoid and where to stay. He suggested an ‘ecological’ albergue in Villafranca. In the guide book it said the place was famous. It had burned down and donations and volunteers had recreated it. I wish they did a better job of the washrooms and showers.
When we registered I told them about the bedbugs and a rather bedraggled Spanish man with duct taped glasses and nicotine stained broken teeth went into action. ‘Zer is standard protocol you understand’. He rushed around, a touch frantic, then told me not to rush. He placed a laundry basket on the table. ‘Everything washed, in here.’ Then he placed a small back bag on the table ‘Everyzing you need for 2 hours here.’
‘Don’t rush, don’t rush’.
Dryer heat is enough to kill bugs. So is the heat from the sun. And dark plastic bags in the sun is even better.
Then a large black garbage bag was placed on the ground and said ‘everyzing else here.’
‘I give you clothes, you shower, your clothes here’ pointing to the basket. ‘Don’t rush. I wash everything. Take 2 hours. Don’t rush.’
‘You’ he said pointing to Linda who had finished registering ‘you wait here’. And then went on to repeat himself.
We dump everything that wasn’t washable: backpack, shoes, sleeping bag, even my money belt into the garbage bag. I managed to rescue my passport, toothbrush, electronics and put that into the small plastic bag. He then sprayed a very unhealthy stream of ammonia which he insisted I smell, into the bag, then tied it up and placed it on a table against a wall in the sun. ‘That is enough to kill Ze bugs,us, but to be extra sure tonight I put into freezer. Tomorrow morning at breakfast, you remind me. All fixed.’ 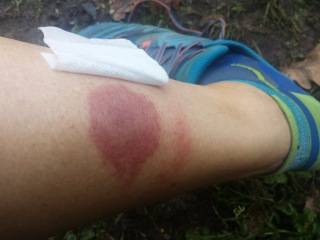 As I sat in borrowed clothes in the courtyard waiting for my clean bug-free clothes, I noticed an older man in typical blue mechanic’s overalls, along with one of those hernia belts, enter through the archway. I wondered what he was doing here, he had a bit of an unbalanced gait and the duct taped man met him. The mechanic seemed to demand money which he was given. He took his coins and went to the vending machine and bought 5 cans of beer (yes, you can buy beer from vending machines here).  Cradling them he disappeared through a door.
Dinner was included and at 8pm, the appointed dinner hour we gathered outside the dinner hall which was right next to the archway entrance. Brian was there and two British women we had been seeing for the last couple of days. The others were new to me.
I happened to look down at my ankle where I had been bitten by a mosquito or so I guessed, the night before and was shocked to see the bite had turned very dark red, spread and looked like it was going up my leg. I didn’t say anything but mulled it over while we waited for  dinner. Some people have strong allergic reactions to bedbugs. It could be an allergic reaction. It could be bedbugs or perhaps two different bugs.
Time passed and finally we were allowed in to the dinning hall an hour late. Brian was grouchy ‘Dinner better be bloody good. I don’t trust the cook who has been drinking since two.’ I assumed he meant the duct tape glasses man but as soup was brought in by the mechanic, I realized the drunken mechanic was actually the cook. And not only that, I think he owned the place.
After dinner I asked Linda if I could borrow her antibiotic cream. I showed her my leg and one of the British woman said ‘I don’t like the look of that. You don’t want an infection in your bloodstream.’ I tended to agree with her.
We returned to the dinning hall where the owner was drinking wine and finishing his meal. I asked the duct tape man if there was a hospital in town. There was rapid discussion with the owner and tension built. I couldn’t get a straight answer. ‘He will drive you’. ‘But where?’ He couldn’t tell me, just that the owner , who was pouring another wine, would drive. ‘No, I can get a taxi. Could you just call one.?’
‘No. He will drive.’
Linda piped up  ‘But where is he going.’
‘None of your business!’
‘But it is my business because I am going with her.’
Still no answer. We didn’t know if he intended to drive me to a nearby town, or….
‘You wait here.’ At this point, the owner  was now pouring wine over his dessert flan and drinking that. There was no way I was getting into a car with him driving.
Linda looked at me and mouthed ‘we have to get out of here’.
I told duct tape man ‘I need to get into my bag to get my medical info’.
‘No! You cannot do that. You were told everything you need for two hours goes in small bag. You have passport? He was quite angry now.
Things were getting a bit heavy, so I nodded and said. ‘Ok, I will get my passport. It is upstairs.’
As Linda and I walked out. We formed a plan in 30 seconds. We would get out of here and high-tail it to the municipal albergue 300 ft down the road and get help there. Mats came to see what was up. I showed thim where my bag was and Mats picked it up and he and Linda disappeared through the entrance. I threw my sarong over my head and around my shoulders like a Hollywood actress in disguise  and soon followed.
At the municipal albergue most people were already upstairs asleep but Paco, a Spanish  young man who spoke English   was still up talking with the Basque Blue Bull (you will be introduced to him later) and he offered to interpret to the two women managing the albergue. Somehow we managed to get two beds and a taxi to a 24 hr clinic in town. Pavo had agreed to stay up and open the door when we got back.  The taxi driver knew a little English so when Linda and I asked for him to stop in a  s pot hidden from the Eco albergue he smiled and complied. While wewe waited there for Linda to sneak i n, grab her stuff, and for Mats to bring a couple of my things, I explained to the taxi driver about the drinking and he arched his eyebrows and explained ‘normal’. 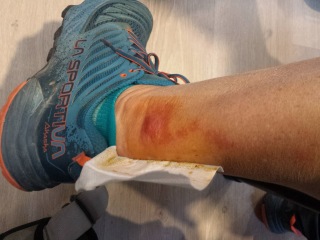 He took us to the clinic and waited. The doctor asked if it was a blister from my shoes that had rubbed or an insect bite. Then he asked/pantomimed  if we had slept in Ponferrada? When we said yes, he nodded and said something in Spanish along the lines ‘It is to be expected.’. With a prescription for antibiotic cream in hand the taxi deposited us back at the municipal albergue where Paco let us in.
All my gear, sleeping bag included was still in the green garbage bag. I didn’t want to open it inside and have the smell of ammonia invade the whole albergue. So I slept in my clothes, glad to be in this refuge. 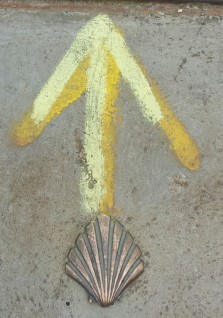 One thought on “Day 26, Ponferrada to Villafranca del Bierzo, Oct 24”