We lost Steffen again today. Suddenly, sadly and permanently.
While putting my shoes on at 7:30 am, Mats informed me that Steffen was in hospital. Rob, who was sleeping in the next aisle to Steffen, heard what he thought was a loud explosion around midnight and a man yelling in Spanish ‘We need help!’. Steffen had rolled off his top bunk and fallen onto the floor. They couldn’t wake him and called for an ambulance. There was a bit of consternation when Rob and some fellow pilgrims found the front door to the albergue locked and no staff to open the door for the ambulance personnel. Somehow someone appeared, and the ambulance people managed to get in and wake Steffen and take him to hospital despite Steffen protesting ‘I’m fine, I’m fine,’ while blood trickled out his left ear.
There are five hospitals in Burgos (that we know about).  Thankfully Rob had kept calm and organized and had written down the name and address of the hospital that the ambulance was going with Steffen. We managed to find the right hospital and find him. Cracked clavicle, a couple of broken ribs and a fractured skull just behind his left ear and a slight concussion. They were keeping him under observation and immobile. The doctor didn’t seem worried about his lost hearing in his left ear; he was more worried about possible damage to his brain. Steffen looked good despite blood slowing pooling in his ear and onto the pillow. 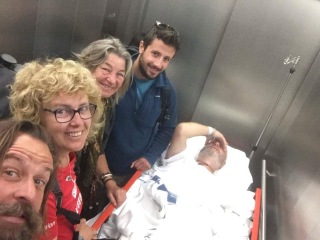 Steffen speaks German, understands Swedish, and all of us speak English, but the nurses only spoke Spanish.  We used Google Translate, and when the nurse explained his ailments, Google Translate interpreted it as  ‘He has broken dreams and pain.’  That pretty much summed it up.
Linda connected with the tourist office, who found a translator Steffen could call on just in case. One of the volunteers at the albergue who spoke both English and Spanish also gave her his cell number.
After delivering his backpack to Steffen, we took our leave of him later in the day and hit the trail again. This time I had another pair of shoes. I was missing that comfortable feeling a good pair of shoes gives you when they wrap around your feet – just like the pair I left at home thinking they may not last 800k, so I better buy new ones. While having lunch and shopping, we ran into Spanish Marta three times. She was taking the train to Barcelona as her one week vacation was over. Just down the  street from saying goodbye for the third time, I found a pair of shoes that just might be perfect. We will see.
We were quiet when walking thinking of Steffen left behind.  Since we had left the hospital in mid-afternoon, we only made it just over 10 kilometres to Tardajos where we met Thomas from Norway. In his early 40’s and very fit, he was struggling to try and take it easy on this, his fifth Camino. A very fast walker he has, in the past, done the Camino in 16 days, half the time of normal walkers! But, he said, ‘I used to be too vain. I need to take my time’. Well, he was with the right crowd if he wanted to slow his pace!
Dinner is often a pilgrims menu, a three-course meal, all wine included for 9-10€. Typically you have your choice of salad with a dollop of tuna, spaghetti, or soup; followed by the main course: chips with either fish, sliced ham, chicken stew, thin steak. And sliced cheesecake, ice cream or flan for dessert.
As we sipped our wine after dinner, we invited a man from the next table to join us. He introduced himself as Steffen from Germany. There was a stunned silence. He looked confused until we got over the shock and cheered. We explained about our Steffen but he had already heard about a pilgrim who had fallen out of bed.  He exclaimed ‘It is big news on the Camino!’
Time on trail: 2 hours
Weather: hot as we started at 3 pm in the heat of the day.
Distance travelled: 10 km
Distance to go: 480 km
Food: pilgrims dinner: café con leche, croissant, mixed salad with tuna, marinated sliced ham with fries, a CEO cream
Lesson learned: it’s good to have a pilgrim family!
Feeling: sad to have lost a family member and grateful to have Linda, Mats and now Rob.
Aches and pains: everything ok but then we only walked 10 km