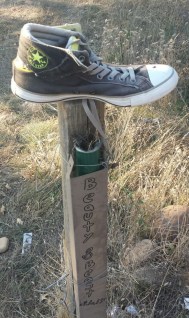 We got up early and were walking by 6:45 – in the dark.  Even so, we were almost the last to leave the albergue.  Again. Sleeping in, while sleeping in a room of 16 beds is impossible especially when the door  squeaks loudly every few minutes after 5 o’clock as another person left. Why can’t they all leave at once? Linda wondered why people rush out the door in the dark and don’t stop to smell the roses, and I agreed, but a while later while walking, I realized there were many different types of roses. There is the rose of walking by moonlight and seeing your moon shadow. There is the rose of walking under the stars, the rose of seeing the sunrise and the rose of early morning light on the hills.
We were sipping café con leche around 7:30 am when I noticed my backpack had peed again, this time on the floor of the café. Embarrassing. It does this when I put the pack down inadvertently squeezing the mouthpiece of the tube open.  I offer to mop it up, but the waitress insists on doing it.
We have 12km to hike without passing a village, and it entails going up a mountain and through woods. We buy baguette sandwiches to sustain us.

We pass John and Aura. Aura looks so fresh and clean. She is wearing a broad-rimmed bolero hat. Over it is draped a delicate white scarf, with thin red and black lines that highlight the lightness and brightness of the white, and is tied under her chin. She looks like a flamingo dancer dressed in a casual walking outfit. She has two hiking poles but is holding them behind her back with both hands swinging them and her hips from side to side. I have seen dozens of pilgrims using hiking poles but no one carries them quite like Aura.
John is wearing his black felt cowboy-style hat and thick blue rimmed trendy glasses. They are stylish. Everyone else is dingy by comparison.
We have a steep climb, and I suck on my water hose, but it is dry. Damn, I forgot to refill my water bladder after putting the pack down next to a bench, and it had peed. I hadn’t realized how much water had leaked out.  Linda has a litre and a half, so I refill from her bottle. We stop for a sock change and then continue. 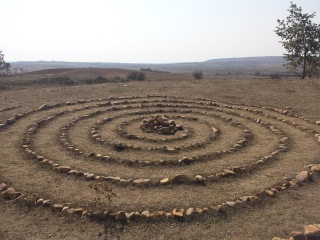 I am a Type II diabetic. I don’t need insulin, but I do need to eat on a regular basis. Unless I am being a couch potato,  I find I need something between meals at 10:30 and 3:30. Today, I ate at 7 and forgot to eat later this morning. Halfway up a steep hill, I ran out of energy. It’s weird; I don’t slow down, the body just stops. One minute you are striding up a hill, the next you are barely moving. No advance warning. I quickly eat an apple and walk slowly waiting for the body to extract some calories out of the apple. If I go too fast, the energy produced isn’t enough to keep up with the demand.  I need a few extra calories in reserve, so I go slow and devour half the baguette sandwich for assurance. It only takes 15 minutes before I am back up to speed.
Later we hear singing behind us, no music, just singing. We had just gone down a short but steep section and were now going up a steep section. We turn to see someone below under the tree canopy at the bottom. They probably didn’t know we were so close by. A while later a beautiful dark-skinned young woman passed us wearing headphones. Further up the trail, we could see her burst into a dance – arms lifting to a private beat and legs dancing in the silence.
We find a pair of stylish green rimmed on the ground and try to think where we have seen them before. We decide to carry them and try to find the owner. Miraculously we do at a take-what-you-need-and-leave-a-donation food and rest area. They are Auras, and she is effusive in her thanks.
We stop at the first albergue in Agés and join a group for dinner. A young Italian man is at our table and entertains us with his vociferous style: ‘I always ask Americans’. He breaks off.
‘Hey! There are a some Americans at the next table.’ And he is off to the next table.
‘ Tell me, please! Why?  Why you Americans put pineapple on pizza?’
Then he was back at our table looking at Mats’ spaghetti. He leans towards Mats. ‘Here. I taste it.’ And he digs in. ‘Cooked too much. Not bad, but…’
At which point, Mats asks for the ketchup bottle.  I could see the Italian’s eyebrows rise.  Mats slowly turns the ketchup upside down and dramatically squeezes out a huge amount.
‘KETCHUP! On spaghetti!’  And so it went.
Time on trail: 8hrs
Weather: Perfect. Cold until the sun got up but then perfect!
Distance travelled: 25km
Distance to go: 518km
Food: café con leche, tortilla, baguette with cheese and ham, apple, banana, chocolate pastries, garlic sopa, huevas and ratatouille, ice cream.
Lesson learned: There are many types of roses.
Feeling: tired but good.
Aches and pains: I have a rock in my calf at needs a massage. No new blisters! The heel blisters haven’t gotten worse. Hurrah!