Last night was very different. We are staying in the 15th C. church, up a small stone staircase past a window which showed the two feet thick walls and in a room @20’x 30′ built onto the side of the church and into the attic. There are 14 thin mattresses on the floor. In the attic is another 10 mattresses, and down below at ground level are 8-10.  The laundry room is in the attic and up some rickety stairs into a dusty, cobwebbed area above the dome ceiling of the church. You could see the dome below.  Dinner was cooked by an Italian man assisted by many volunteers.  The Knave, his Jester and The Viking were there too.
Mats warns us that this last time he was here they asked everyone to sing a song from their country.  Linda suggested we sing This Land is your Land.  I prayed we wouldn’t have to sing.  I only knew the chorus.

While they prepared dinner, many of us went to evening mass. We didn’t understand anything, except at the beginning you knew the priest was welcoming the pilgrims and at the end invited the two dozen pilgrims there into the inner sanctuary where many treasures were on display: a case of silver chalices,  ancient manuscripts opened on stands, statues and priestly garments.
Byron from Winnipeg asked the priest if he spoke English. We interpreted the priest’s reply to mean that he only spoke one other language:  Katukina, a language that only an Amazonian tribe of 200 speak (I looked it up). I asked how long he was there and he said 10 years (I think). He left because he became sick. I wish I could speak Spanish as he would have had interesting things to say about his life.

42 pilgrims sat down for dinner, and 42 helped wash, dry, and stack the dishes. Washing dishes breaks down any shyness left over from dinner. Then we were asked to come into the church for a meeting, and we would hear why they were the only church on the Camino that did not have a stamp.
The cook led the way into our bedroom where an unnoticed door was now open. It led to the balcony in the church. I realized the laundry room was right above us. The elaborate gold carved wall behind the altar below was lit up while all else was dark. The balcony had 30 carved wooden thrones built into the walls each with arms on which a small lit candle flicked. Once we were all in the lights dimmed and the young Italian woman who had greeted us at dinner, spoke about the tradition of passing a candle from person to person. Whoever held the candle could share, in whatever language they chose, a story, an experience, a wish, a dream. And so the candle was passed from the person. It was a very magical time. 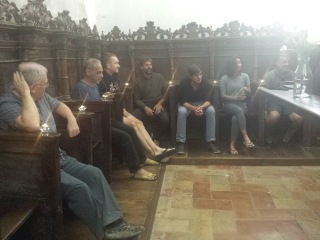 And the answer as to why they did not have a stamp to stamp our pilgrim passports, was that instead they gave hugs and we were encouraged to hug everyone. That answer sounded a bit hokey to me. I bet they just lost their stamp and hadn’t been able to replace it yet. In case I haven’t explained the Camino passport/credential – you have a Camino passport, and you collect stamps (the ink pad type) along the way to prove that you really did hike the trail.
As we spread our hugs around, I looked for the German Knave and his Jester and the Viking but they had disappeared.
Time on trail: 6.5hrs
Weather: cold in the morning, perfect 10-1ish, too hot 2-4pm
Distance travelled: 22.5km
Distance to go: 515km
Food:  cafécon leche, Italian soup, bread, salad, fruit salad.
Lesson learned:
Feeling: ready for bed.
Aches and pains: new blisters are forming and the heel blisters causing issues. On the plus side, body aches and pains seem to have gone.