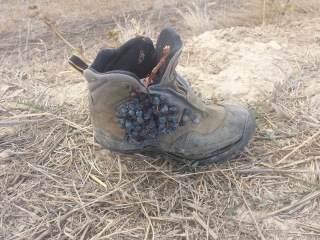 We (Mats, Linda and I) started early enough to walk in the moonlight, although being in the city with Venus behind us and the moon high in front isn’t quite ideal. And, we only walked in the moonlight far enough to find a cafe/bakery open for breakfast.
Inside the café, we found Lisa and Emily and met Brian and Zosia from Victoria. They looked vaguely familiar.  After a café con leche and a croissant, with Mats picking up a baguette and we were on our way again.
Once out of the city and 6 km into the countryside we entered a park with winding trails and a café overlooking a lake.  Once again Lisa and Emily were leaving as we arrived. They hoped to get to Ventosa, our goal for the day, but then take a taxi into Nájera . Lisa was on a tight schedule and had only two weeks, and Emily found the distance a bit too far. Steffen met up with us but soon left us in the dust so to speak. 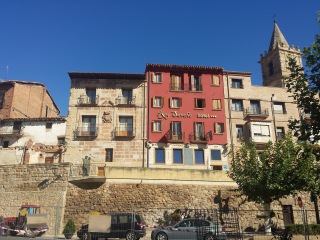 Not too far down the road Steffen, in socks to air his feet, was sitting on a rock waiting for us. The four of us entered Navarrete, a hilltop town, but bypassed the pilgrim crowd that had collapsed into chairs at the first cafe in town.  Mats knew the best bakery in town, and we loaded up with pastries and pies, then off to the grocery store for wine, sausage and cheese.
We arrived at one of the best albergue so. They greeted us at the door with glasses of water. They have 42 beds in six rooms, but some rooms are probably closed. They also had incense burning in the entrance where you leave your shoes.
I meet up with Brian and Zosia again and realize I had taken a ‘how to pack for the Camino’ workshop from Brian at the Canadian Society of Pilgrims Spring Workshop day this past spring. And, I had had coffee with Zosia during the event. This was their second Camino, and he was still thinking of what he didn’t need to bring. He had already dumped some oils. I felt pretty good that his bag without food and water weighed 8 kilos. Only .8 of a kilo more than mine.
We had enough energy after dinner to explore the small town. We must be getting fitter. Mats said its in week two that we should really start to lose weight. About time.
Time on trail: 7hrs
Weather: cool, almost too cool for the first few hours but by 2pm it was up to @24.
Distance travelled: 18 km
Distance to go: 593 km
Food: croissant, café con leche, enpanada, baquette, cheese, sausage, apple, pastries and one dead average ice cream.
Lesson learned: it’s a small world.
Feeling: strange, sad, but a rest, dinner, and a short snooze picked me up.
Aches and pains: one small new blister on the end of a toe. 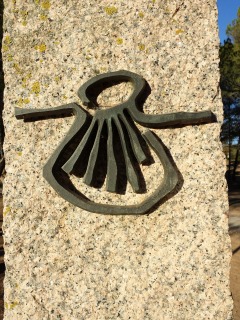