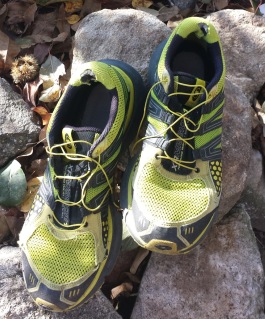 We decided to use the luggage transfer service.  Rather than using a water bottle, my backpack has a flexible water bladder that slips down into a pocket at the back and has a hose that goes out the side of the pack and dangles down in front. The hose makes it easy to drink, just squeeze your lips on the mouthpiece and suck.  Bottles are awkward to reach and find, then undo the top.  A hose flopping and tapping you on the shoulder encourages you to drink.  So, we still needed our backpacks to carry food, wine and water. We took a few things out of our packs to lighten our loads by @5 lbs each.  We got a garbage bag and put the unneeded 5 lbs in, and the volunteer host showed us how to fill out the transfer form.  It meant we had to pre-plan our day and figure out where we would be staying that evening and have our  luggage sent on to that spot. The luggage service was worth the €2.50 it cost each of us – our backs felt lighter, our feet felt happier, and our minds felt only slightly guilty.
As we left Estella, we kept an eye out for the famous wine fountain. It is built into the walls of an old but still operating, winery.  We couldn’t miss it. It was right beside the trail and at 9 in the morning at least 8 pilgrims were there with their scallop shells sipping wine. Mats had told us about it saying the first time he was here the fountain had run out before he could get any wine.  The second time the man in front of him in the lineup told him it ran out.  It wasn’t until days later when talking about the fountain, with a group which included the man who had been in-front, that Mats mentioned he had been there twice, and both times it had run out that the man, in a horrified-what-have-I-done look said ‘But I was only joking!’ This time Mats was determined to drink some wine. 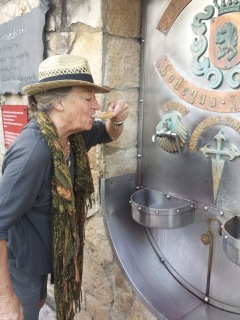 Just after the fountain, the route split, and we had to make a choice of which route to take. One was only slightly longer and went through woods. Since it was hot, dry and sunny, we took the shaded route through the woods. We met up with Emily from South Carolina who was no longer walking with her friend Patty, and three young Christian women travelling with 14 others from their church, working their way around the world doing good deeds. At one point we heard what we thought was gunfire and hoped was a car backfiring but three more shots rang out. I suggested that it might be hunting season and pointed out the deer scat. Emily was very nervous and suggested we sing, but no one seemed to want to sing, so she loudly called out people’s names. Within a few minutes, we entered a clearing under a hydro line and noticed a hunting dog. He looked at us, then upwards and back at us.  We looked upward, and there was a hunting blind with, we assumed, a hunter. ‘Hola’ someone called out forcing him to reply. I got the feeling he didn’t want us to give him away to his prey.
The woods kept us cool for the morning but around noon we were back out in the open, and it was hot.  We spread out, and I walked with an older Icelandic man, Ollie. He, his wife and her two sisters had walked from Brittany. We had a good long chat about Icelandic things. He could trace his lineage to one of the first settlers of Iceland back in the 800’s. I told him that Gudrid Karlsefni was one of my ancestors. She too had done a pilgrimage from Norway to Rome. I thought it would be interesting to follow her route and see if any of the monasteries had recorded her name.
We had such a good conversation that it wasn’t until I realized we were about to go over the top of a big hill, which I didn’t remember seeing on the map.  We had already climbed quite high when I looked down and saw backpackers way down below.  Only then did we realized we had missed a turn. I dug my smart phone out and turned on the GPS with the Camino Frances waymarkers I had downloaded at home.  Sure enough, we were on the wrong road. Luckily, it showed a dirt track just up ahead that joined the right path below, so we didn’t have to backtrack.
During the course of the day, I changed shoes four times in an effort to break the new ones in and give some comfort to my feet. It was a long day, but we made it and found Mats, Lisa and Stacy, who were staying at the same albergue.
We asked Mats if he managed to get some wine and he showed us his water jug which seemed almost full. ‘I got to ze fountain and had no cup or shell to fill, so I looked at my water jug, looked at the wine fountain and poured my water out.’
Unfortunately, today was so hot and villages so far apart, that people ran out of water. Poor Mats had to drink wine.
Time on trail: 8hrs
Weather: hot. 27degrees
Distance travelled: 21.5 hard km Probably 1 to 2 km more as I took the wrong turn.
Distance to go: 641 km
Food: croissant, café con leche, tortilla, pasta, salad, ice cream, chocolate.
Lesson learned: know where you are.
Feeling: very tired.
Aches and pains: feet, hips, legs are all sore. Blisters seem to be better. 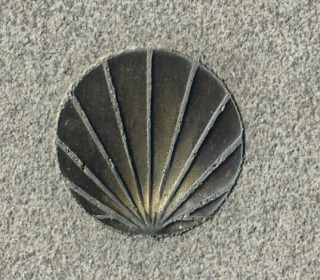