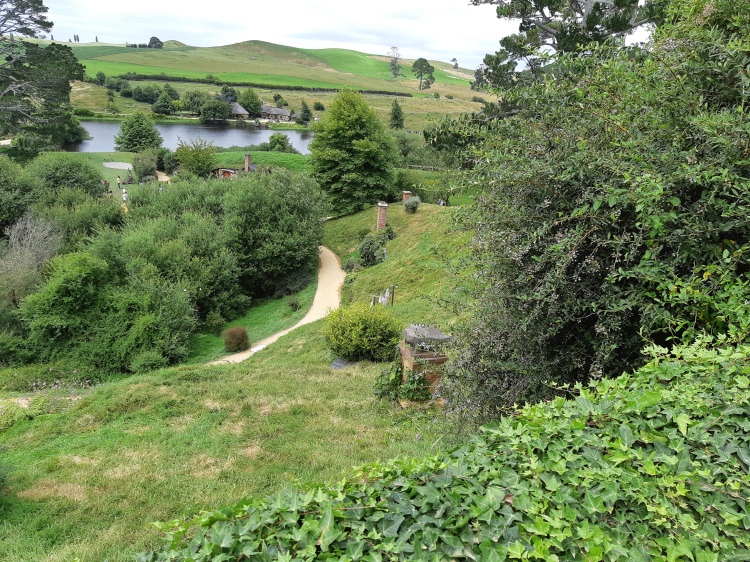 Today was tourist day. We drove out to Hobbiton, the film site where The Hobbit and Lord of the Rings were filmed. A tourist trap but I have to admit, it was worth it. 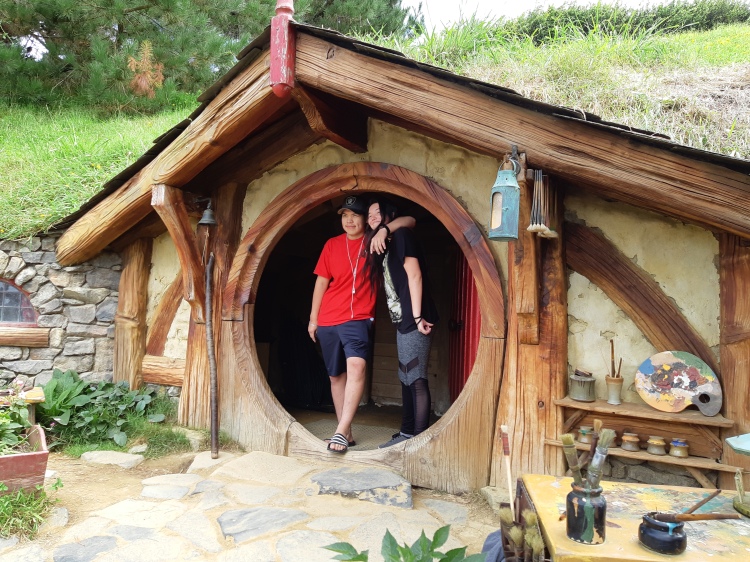 The natural scenery was beautiful in a I-want-to-live-in-this-fairy-tale place and the film set was tastefully done. You are driven into the property on buses while watching snippets of the movie. The scenery is rolling hills dotted with cows and sheep. On a hill ridge three horses are silhouetted–how do they get the horses to do that? 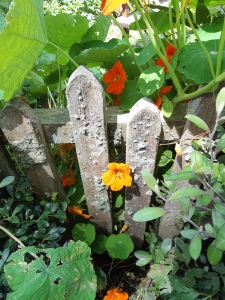 We disembark the bus and follow a track where, just last year, 600,000 trod, yet it looks just like any path in a wood. The track takes us past hobbit house fronts, hobbit laundry lines, gardens and under a fake giant tree–whose only clue that it’s leaves were made in Taiwan are its stiff unyielding to the wind branches. They created a special paint, which includes vinegar and lichens, which protects the wood and adds lichens but not the local lichens which would slowly degrade the wood fences.

Air New Zealand has all the associated movies on-board so I plan to watch a few. 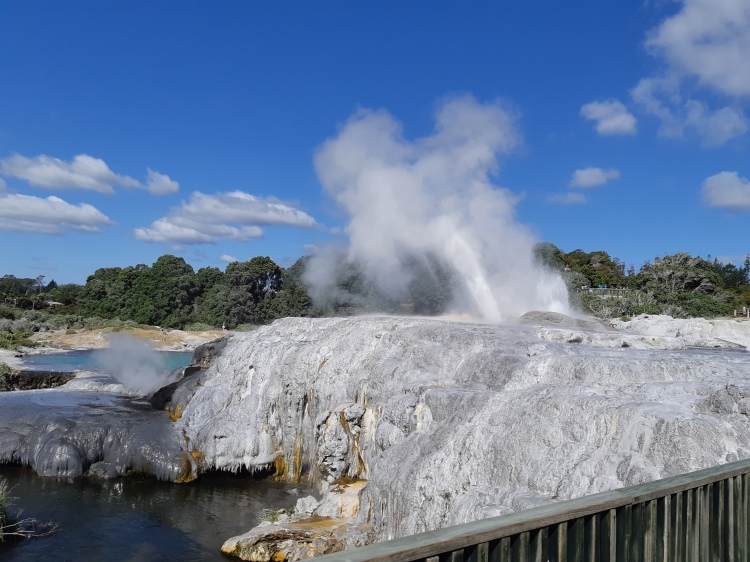 Our next stop was Te Puai (more here) located right next to a Marae. The contains geysers, mud ponds, a wood carving school, a weaving school, craft art gallery and a restaurant. 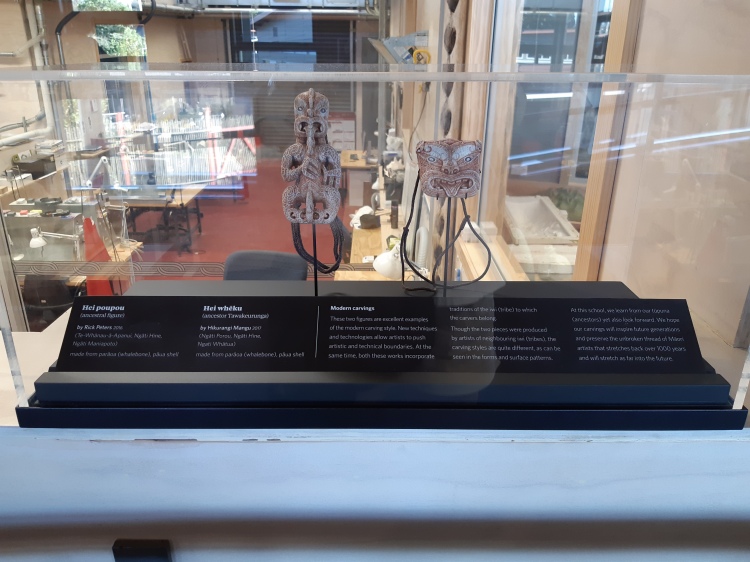 It was the schools which interested us. They only take three Marae students each, each year for three years. The hope is that the graduates will return home and pass their knowledge on. Much of the tourism profits from visiting the site goes to pay the full cost scholarships for the students. 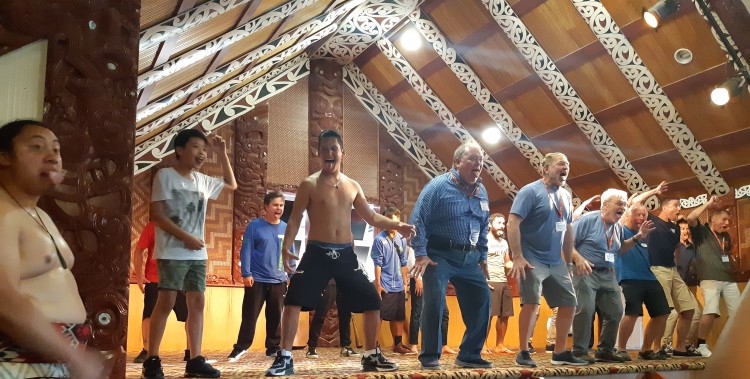 The Maori from the Marae use the pools and warm river to swim in but only after 5pm when tourists have left and aren’t tempted to walk across the boiling mud and thin mineral crusts covering the boiling water, to join them. 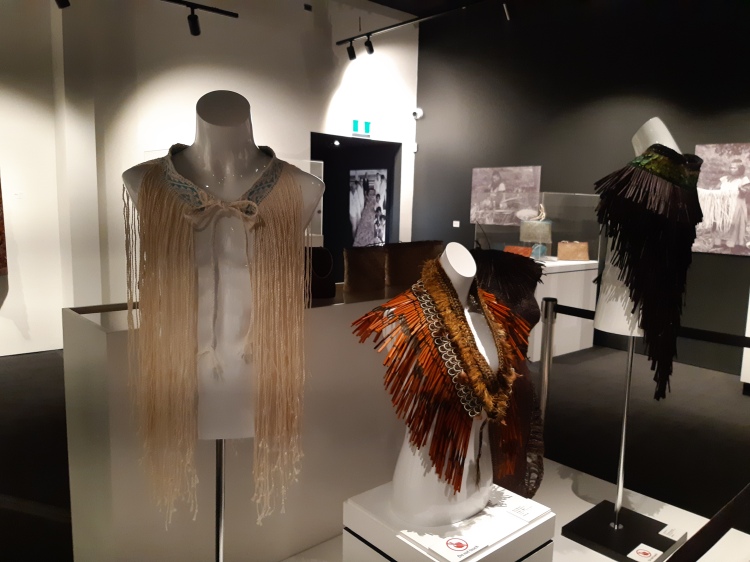 We are treated to another Powaini at a recreated Marae on-site, followed by a haki and poi dances. Of course, members of the audience were invited up to dance and poi. Many of our youth jumped at the chance with knowledge of the movements already under their belts.

The next day is a driving day, we are headed to Waitangi, 6 hours north. Chris discovers that their is a totem pole at the north end of Auckland, two minutes off our route. It has an intriguing story. A hundred years ago, three Maori came on a ship from New Zealand and landed on Vancouver Island. They married three Hesquiaht women and took them back with them. Tim Paul a Hesquiaht carver is related to the descendants and carved this pole to commemorate them. 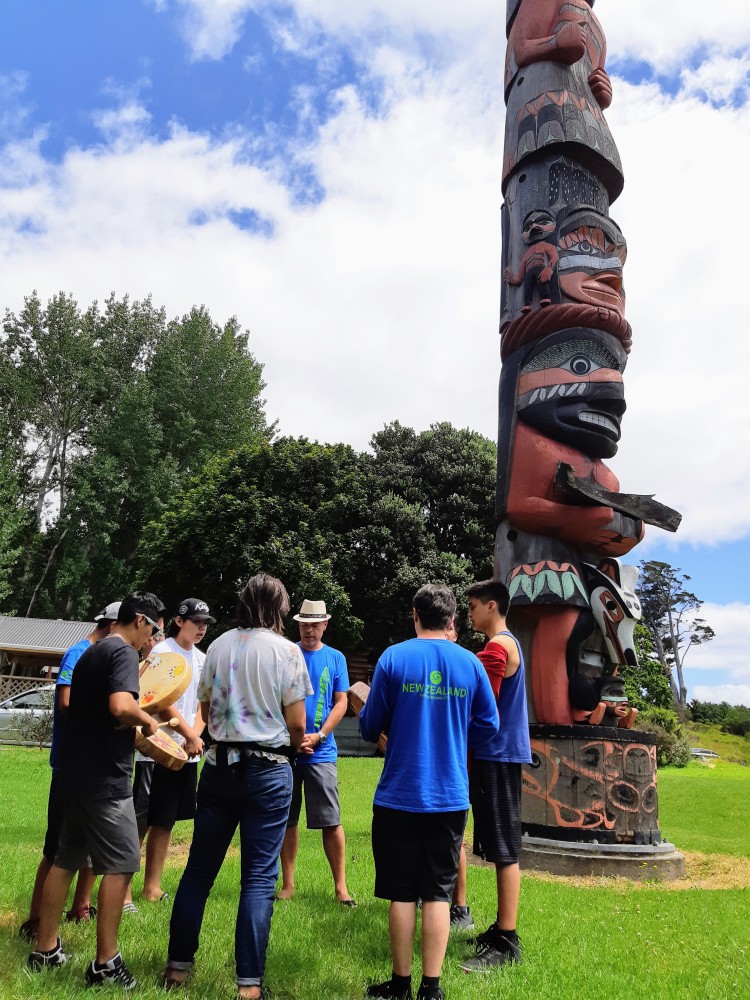 The pole points south overlooking one of the highways. It is protected by four Maori guardian poles. Four of our youth are Hesquiaht. They have been diligently practicing a song a gifted to them by two of the boys’ father. A cousin of the brothers will become a hereditary chief when he turns 21. They bring their drums and form a circle. Ruby turns to one shy youth standing next to her ‘You’re Hesquiaht, aren’t you”? “Yes” he replied and went to stand by his totem. They drummed and sang. Two of these youth had a hard time speaking in public when we started. You couldn’t tell that now. 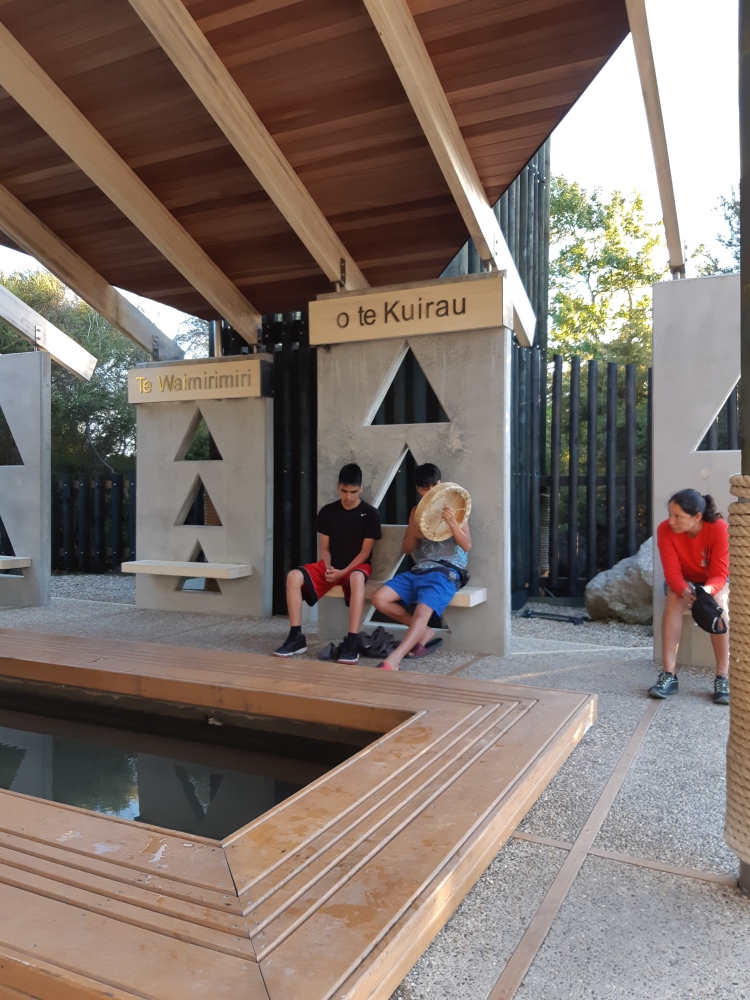 The other evening while we walked in a park I saw a couple of the youth practicing with a drum. Another youth was quietly singing. One of the brothers was firm when he said ” If you are going to sing, you have to be strong. This is how my father taught me and I am teaching you.’ 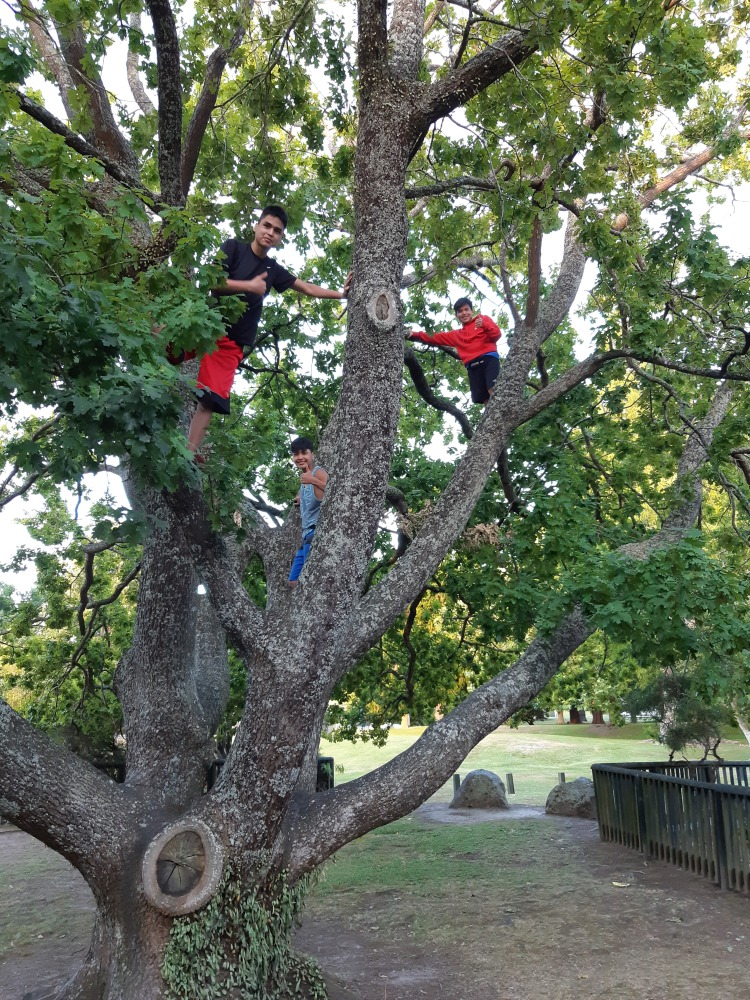