Left at 7a.m. But we stopped only 5 mins later for coffee . Joyce, Cathy and I had laughed when, in a 4 bed pod back at Rovevalles we had shared it with Piet from Rotterdam and did that count as sleeping with him? Last night we had 8 men in our bunk bed section and the two of us. One man kept clearing his throat up until lights out. I was worried and kept some sleeping pills nearby but I didn’t need to resort to them. The only snoring i heard was coming from the bunk below me where Cathy was sleeping. Apparently if she takes a sleeping pill she snores. I suspect she took a sleeping pill.
We missed Joyce today and also last night when she went to mass and was late in meeting us for dinner. She finishes in Estella, two days away. I hope we find her before then. We ran into Bill from Whidby Island and Rob from Denver on the long uphill climb. We chatted a bit and then stopped to add a layer as the wind was starting to blow. Throughout the day we played leapfrog with them. 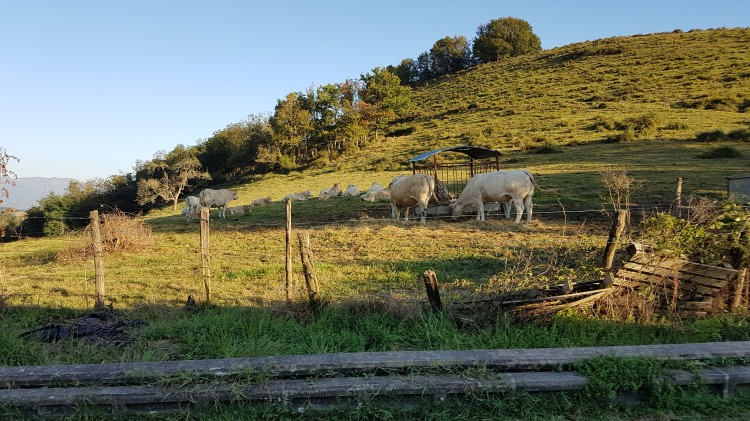 On the lonely stretches on the way up to ‘Where the route of the stars meets the path if the wind’ it seemed only fitting to listen to Paul Kakanithi’s ‘When breath becomes air’, an account of his life as a neurosurgeon and brand new father cut short by his death at 36. He covers the act of dying, as a doctor who stops seeing his patients as problems to be fixed to seeing them as patients who need guidance in making difficult decisions, and, as a patient who finally relinquishes the reins of doctoring to his doctor. It is beautifully written.
At one point he quotes Samuel Becket ‘I can’t go on. I will go on’. Going up this hill I can associate with that.

Distance travelled: 24k for a total of just under 100k

Weather: breezy which kept the uphill going at a cooling temperature.

Lessons learned: the uphill has you gasping while the downhill makes you groan.

Health: sore feet from the steep downhill but still no blisters